Best solar phone chargers, and ones to avoid

Some types of solar phone chargers can actually shorten your battery life. Here’s how to choose.

If you frequently experience the frustration of a smartphone that’s running out of juice and having nowhere to charge it, you should consider a portable solar battery charger.

This article includes links to Amazon.com, and we may earn a small commission when you purchase one of the products listed on this page. Our reviews are independent, and none of the companies have paid to be featured.

These portable devices range in sizes no larger to a smartphone case, to larger folding chargers with multiple panels that can supply enough power to charge a tablet or even a laptop.

Your product choice will depend on the type of device you want to charge, how frequently you need to charge, and whether you need power delivery even after the sun has gone down.

Before listing some recommended models, let’s first take a look at some devices that you should definitely avoid.

There is one type of solar phone charger that you should not use, which are phone cases with solar panels built into the back. Here’s an example:

The reason is that heat will shorten the life of lithium-ion batteries, and if you use solar smartphone chargers the way they intend, you will be subjecting your phone to a lot of heat that can damage your phone’s battery and permanently reduce it’s maximum capacity.

As you can read in this Battery University article, lithium-ion batteries like to be cool. Temperatures above 85F will start to stress a battery, and going much higher than that can severely stress the battery and shorten its capacity.

If you look at how they solar phone cases are designed to be used, they are bound to generate a lot of heat.

First, they wrap around your phone, helping to hold in heat - but that alone isn’t so bad, because that’s what all phone cases do. But to charge your phone, you put your phone face down in direct sunlight so the solar cells on the rear of the case can charge your phone.

The effect of putting your phone in direct sunlight, even if it’s through a window, will heat up your phone quickly. On top of that, you’re now also charging your battery, which results in additional heat. Finally, the wraparound case helps to hold the heat in.

In other words, you’re basically cooking your phone with these devices. They’re bad for your battery. Don’t use them.

Solar chargers you should choose

The best type of solar chargers are either:

In terms of the latter, you can find compact solar panel-battery combos that have only one small solar panel. These should be avoided, because one small solar panel isn’t going to generate very much wattage - barely enough to keep your phone topped up, let alone charge one that’s deeply discharged. If you need something that compact, it’s better to just get an external battery and skip the solar charging altogether.

With that out of the way, here’s some solar chargers that are highly recommended: 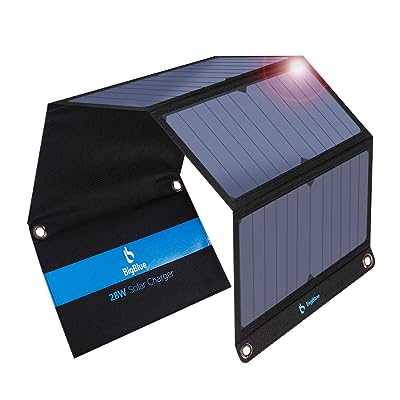 The BigBlue is a great choice because the 4 SunPower solar panels gives it a large enough output to charge larger devices such as a tablet or Chromebook. In addition, it has both older USB 2.0 and newer USB Type-C ports. The advantage of USB Type-C is that it has a higher output voltage, resulting in faster charging for devices that support it.

The use of flexible monocrystalline SunPower cells is a good choice for this type of device because of the high power output. Other portable chargers may use thin-film solar, which has the advantage of being very flexible - even rollable - but at the cost of lower efficiency. These cells have the same efficiency as SunPower home solar panels, but in a flexible format.

Note that these types of cells are only partly flexible. They can withstand about a 30 degree bend, but anything more that that risks damaging the cells. This means that this charger should be stored flat, and not jammed at the bottom of a backpack where it could get damaged. 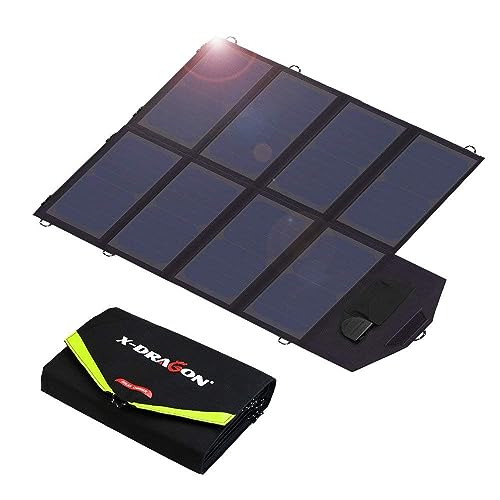 If you have large power requirements, such as charging a laptop, this X-DRAGON charger with eight SunPower cells is the one for you. With 40 watts of output, it has enough power to charge a smaller Windows laptop or Macbook Air when used in full sunlight. For Windows laptops, it has an 18V DC output and a selection of charging adapters that are compatible with the most common Windows-based laptops. This is a great feature for laptop owners, because the higher voltage means more efficient charging.

It also has two standard USB ports that you can use to charge smartphones, tablets, or a newer Macbook (with a USB Type A to Type C cable).

Like the BigBlue, the X-DRAGON uses flexible monocrystalline SunPower solar cells. This means that while the cells can be safely bent up to 30 degrees, you should store this device flat to ensure that the cells don’t get damaged.

The tradeoff for the large power output of the X-DRAGON is that it’s a pretty chunky device. Folded up, it’s shorter and narrower than a sheet a paper, but more than 2 inches thick.

But if you’re frequently outdoors and have hefty charging requirements, a solar charger large enough to supply your power needs will be beefy. The X-DRAGON, with its eight monocrystalline panels and a 4.2 star rating on Amazon, fits that bill nicely. 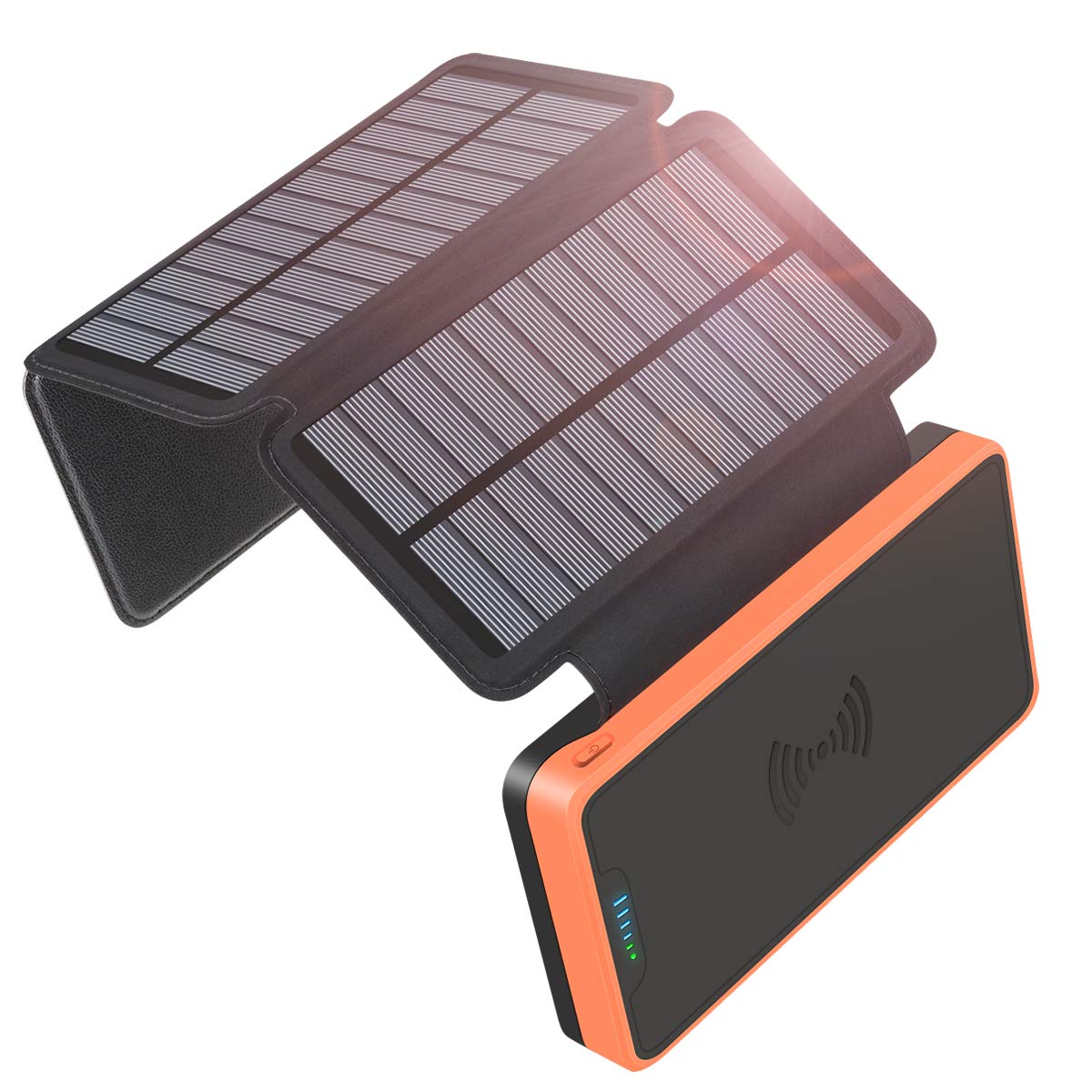 Sometimes you want to be able to charge your devices even when the sun isn’t shining. This combo solar panel charger/battery bank does just that. With its huge 20,000 mAh capacity, it’ll charge even the largest smartphones or tablets multiple times before being drained. It has three solar panels, which makes it a better option than other solar battery banks that include only one small panel.

It includes two USB ports with 2.1A output, and also a Qi charging pad for wireless charging.

The package is integrated with 3 fold out solar panels. SOARAISE doesn’t list the type of solar cells, but the combined output is only 4.5 watts, so it’s using lower quality cells. 4.5 watts is enough to charge a phone in full sunlight, but fully charging the battery bank will take multiple days. Still, that’s enough to save you in an emergency when the main battery is dead.

This device is best used by fully charging it via the USB port before leaving home, and using the solar cells to keep the device topped up.

Why no thin-film solar chargers?

Thin-film solar panels use a different chemistry than the more common crystalline silicon panels used in these devices and on the solar panels that you find on homes. The different structure and manufacturing of thin-film solar allows them to be extremely flexible, even completely foldable as a sheet of fabric.

There are a few thin-film portable solar chargers on the market that roll up into a neat package. So why aren’t they recommended?

The second reason is lower efficiency. The SunPower cells used in the BigBlue and X-DRAGON are among the highest efficiency cells on the market, which means that they can deliver more power in a smaller package. While thin-film chargers can be rolled up, when deployed they need a larger surface area to achieve the same wattage. This is less convenient for the use cases that are typical for portable chargers, like hiking and camping.

January 10, 2020
If you’re going solar to help the environment, here’s an objective look at solar panels and their impact on climate change.
January 4, 2020
80% of the home solar inverter market is dominated by two companies. Here’s a side-by-side comparison.
January 2, 2020
If you have a small-to-medium size house, this article will tell you how many solar panels you need to power it.
December 27, 2019
In the quest for better solar cell efficiency, manufacturers keep deploying new technologies, and heterojunction cells is one of the latest.
December 18, 2019
Choosing a solar panel can be confusing, and one of the common decisions is between mono and poly.
December 9, 2019
Home energy storage is a small but rapidly growing market. While the upfront cost is high, there are significant rebates that bring the cost down.
December 6, 2019
Solar panels generate DC electricity, but more companies are selling AC solar modules. In this article, we’ll explain what these are.
December 5, 2019
We’ll address the myth that putting solar panels on your roof puts your home at greater risk of lightning strikes.
December 3, 2019
Passivated Emitter Rear Cell technology is one of the latest tools that manufacturers are using in the race to make more efficient solar panels.
November 26, 2019
Across the country, net metering is under attack from utility companies, who claim it’s unfair for non-solar homeowners.
November 22, 2019
Buying solar panels from a US company doesn’t mean their panels were made in America. Here’s a list of models that were manufactured in US factories.
November 18, 2019
By shading your roof, solar panels can lower the temperature of your home by several degrees.
November 14, 2019
You can save at least 55% off the cost of a home solar system in South Carolina.
October 31, 2019
If you’re trying to get the maximum power in the smallest space possible, you’ll want to take a look at these high efficiency solar panels.
Thinking of going solar?